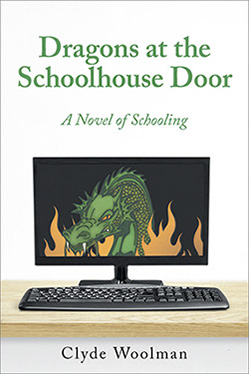 Dragons at The Schoolhouse Door: A Novel of Schooling

“Woolman’s characters are brilliant composites that anyone in education can recognize and relate to. The use of irony and satire make them enjoyable, memorable, and engaging.”
Gerald Fussell – School Principal.

“Enjoyable! A candid look at public education from a writer who has been there. Engaging characters move the story, which has humor and intrigue. . .”
Todd Phillips – Teacher Librarian.

Steve Hepting often wonders why he left the classroom. The travails of a strained working relationship with Superintendent, Jennifer Capelli seems to have abated, at least temporarily. Capelli is more interested in her secret scheme to transform what she believes to be a moribund education system. The public announcement is set for the 2011 school year, Hepting’s second in the principal chair.

Though more confident, Hepting still cannot convince an evasive bureaucrat of the need to clear the flotsam and jetsam of the school district. piled high in the unused classrooms on the second floor. The junk is home to feral cats and other wayward creatures, known only to the slow-witted, yet stock market savvy custodian, Frank “Tiny” Little, and two learning disabled and socially awkward boys.

The “Animal Hotel” is not the only peculiarity at the school. Maintenance requests are ignored. A smarmy little scoundrel is seen crawling about in the ventilation shafts. District leaders tour corporate executives through the school. A hostile parent becomes Capelli’s confidante. A newly transferred teacher seems to have an unusually close bond with the superintendent.

With the help of an assortment of quirky faculty members and a scandal-sniffing journalist, Hepting works to uncover a stupefying scheme for a “Brave New World” of public education, using his school as the launching pad.

“I really identified with the colorful characters and the humor poked at the system. This was an enjoyable walk along the road of school administration.”
Judy Berkeley – Vice-Principal-Counselor.

Dragons At The Schoolhouse Door is available online from the following distributors....

Clyde Woolman has been a teacher and counselor, a principal of an elementary, a middle and three high schools, and completed a six-year stint as a Superintendent (CEO) of a school district before reengaged neurons led him to voluntarily announce a return to a school. At one time or another he has been involved in education from Kindergarten through to the university level. He has delivered keynote speeches at conferences, sat on panels, presented workshops and seminars and led teacher and principal teams in writing reports on schools. At one time he could fling edubabble around as well as most. He often tried, occasionally with success, to see the humor that lay behind and beyond the peculiarities and foibles that can abound when a place called school is your workplace. Clyde is the author of several articles on education leadership and two young adult adventure novels (2010 and 2013) emphasizing themes of tolerance, trust and friendship.  Smugglers at the Lighthouse and Yurek: Edge of Extinction were published by Moosehide Books of Ontario.