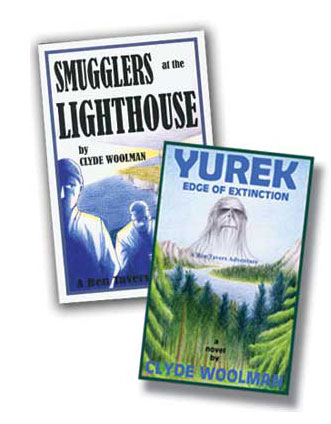 Each Ben Tavers adventure novel emphasizes a theme of tolerance and trust with a healthy dose of humor and magic, and were published by Moosehide Books of Ontario, Canada,  (since ceased publishing).

Sensitive, tolerant and seemingly ‘different’, 13 year old hockey-nut Ben Tavers is ostracized and occasionally bullied by his peers, and not just because he is an avid Maple Leafs fan recently moved to Vancouver.  Though small in stature, Ben’s inner strength, courage and clever creativity allow him to form lasting bonds with unlikely and memorable characters during a desperate search to save a dying runaway teenage sasquatch in 2013’s ‘Yurek: Edge of Extinction’, and when battling a sinister smuggler in 2010’s ‘Smugglers at the Lighthouse’.